The company’s flagship water park, Aquatica Orlando, will see one of its opening day attractions, Dolphin Plunge, be reimagined with new tubes and improved animal interactions. Using the latest translucent tube technology, the reimagined attraction, rebranded as Reef Plunge, will see guests slide through colorful rings before racing through an authentic reef environment filled with sharks and marine animals.

> The shift to now include other animals in the dolphin habitat is more than just a response to the inevitable end of Commerson’s dolphins in SeaWorld’s care, however. As part of their ongoing push to better improve the habitats, SeaWorld announced the Dynamic Habitat Initiative last year. This program looks to develop more stimulating habitats for animals by introducing multiple species in a single habitat. Among the first habitats to see the DHI improvements were the Commerson’s dolphins at Aquatica. A spokesperson for SeaWorld confirmed to the Orlando Weekly that the new reef reimaging of the Commerson’s habitat is part of the DHI, with more species planning to be added to the habitat in the future.

> SeaWorld's other water parks won't be forgotten. The racing family water slide we reported on in September was confirmed for Adventure Island in Tampa. It will be joined by a completely reimagined Wahoo Run, now known as Wahoo Remix. The former dark tunnels of Wahoo Run will come alive with synchronized light and sound elements, similar to Disco H2O at the now-closed Wet ‘n Wild in Orlando. click to enlarge 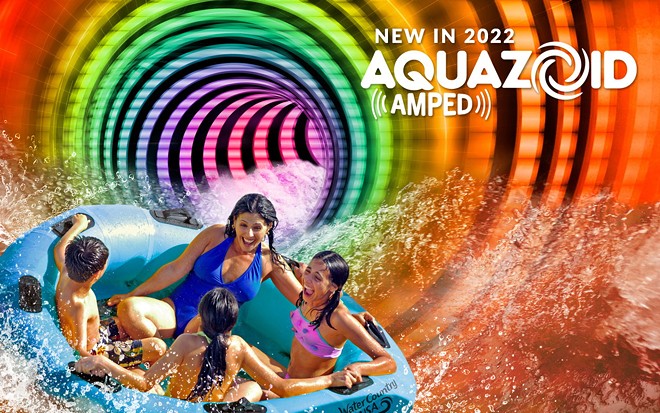 > A similar family slide will also open at Water Country USA in Williamsburg, Virginia. In announcing the new Virginia slide, SeaWorld noted the lighting elements make each ride on the attraction unique, providing an incentive to ride it multiple times.

In Texas, Aquatica San Antonio will be getting a racing slide, not unlike the one coming to Adventure Island. It will share a look and name with the similar attraction, Riptide Race, that opened at Aquatica Orlando this year. The Orlando version took the title of the world's tallest dueling water slide racer when it opened in April.

Finally, in San Diego, the former Aquatica there is getting a complete overhaul as it becomes Sesame Place San Diego. The kid-focused amusement and water park is slated to open in March.

It’s the Ultimate Ice Breaker, and Only at SeaWorld Orlando!

Read It’s the Ultimate Ice Breaker, and Only at SeaWorld Orlando! by Meetings Today